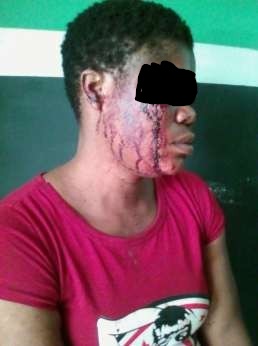 The husband – Rasheed Salami (a vulcanizer) locked her out that fateful night because she prepared eba & okro soup for dinner but he demanded for pounded yam instead at 11pm. She appealed to him to eat the eba that night so she can prepare the pounded yam the next day but he refused, as the beating started, she ran out for safety & he used the opportunity to lock her out. She passed the high outside their house gate & went in the next morning around 6a.m when a neighbor came out to work.

He told her to go back to where she was coming from but when she refused to leave, he commenced the beating again, locked her in & went out. She managed to escape & came to our office to make a report. After taking care of her, & subsequently invited both of them at different times, Mrs. Salami said she was tired of the union, with all the incessant beatings, disgrace on the road & before he kills her. She left with the three (3) kids from the union to her brother’s place till she was able to gather some money with a token support from the foundation to start a trade which after a while her husband came back beginning her family. It was resolved that she will go back after he has signed the undertaken with us and that she will also continue with her trade. Which was done