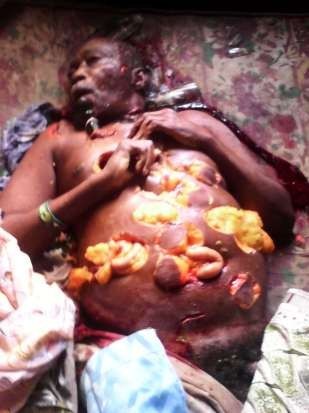 6yrs  old  sick  Pa  James  Udoh,  whose  son  –  Michael  22,  a  wayward  & troublesome child, always bringing troubles & sorrow to the family killed in a bizarre way. His mother, Madam Rebecca Udoh sells canteen downstairs of their building in the estate was always protective of him, to the extent that 2 weeks the unfortunate incident, Michael was picked & locked up by the Police during one of their raiding operations, she went to bail him & got him released. The late father had always told him “before you kill your mother, you better kill me o because she’s the only person taking care of me”, so on this fateful day, he decided to put it in action. After eating at the mother’s canteen downstairs, he entered their flat through the window with a broken bottle & stabbed his father severally on the bed in the abdomen before leaving again through the window to only God knows where. The heinous crime was discovered, a report was made at the nearest Police station where some policemen came to the scene, looked around & left. The foundation was now contacted  that both the Police & the doctor were asking for money before a Police report & medical/autopsy report will be given. We then contacted the IPO of the case & the doctor, threatening to report  them  to  the  relevant  authorities  if  they  don’t  comply  rather  than allowing them to stress the already traumatized family. This promptly brought out the required reports, they were given to the family & their father’s corpse to them for burial in their home state of Cross River State. Michael was eventually apprehended & made to face the law. Presently, he is cooling his heels at Kirikiri Maximum Prisons for murder case.